Home Run Derby, which I recall seeing in repeats in the early 1960s, was a syndicated TV show originally broadcast from January to July in 1960, with half-hour segments filmed in 1959 at Wrigley Field in Los Angeles. The show gave MLB’s top slugger’s three outs each for nine innings to see which one could hit the most balls over the fences, and is the inspiration for today’s home run derby at the annual All-Star game.

The contestants didn’t have to swing at any pitch, but if the plate umpire (there also were two along the lines) called a strike, it counted as an out. The pitchers were supposed to throw reasonable meatballs.

As bad as the late 1950s Senators were, the show often featured three American League sluggers from the team: Harmon Killebrew, Jim Lemon and Bob Allison. The show never had the Nats’ Roy Sievers, the A.L. homer champ in 1957. (He missed significant time in 1959 with injuries.)

Killebrew appeared four times, winning twice and losing twice. He hit 23 balls over the fence, among the top figures in the series. Allison, who hit 30 homers as a rookie i 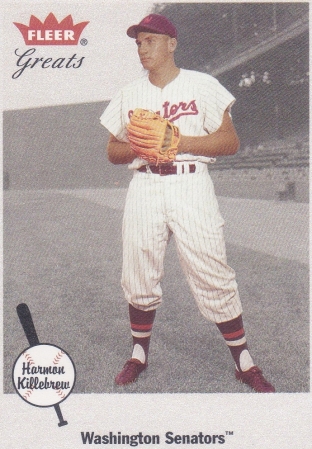 Mickey Mantle won the first four Home Run Derby shows until to losing to Killebrew, 9-8, in the fourth segment. With bonuses awarded for consecutive homers, Mantle earned more $25,000 for those four shows in an era when players salaries were tiny compared with today. Mantle, who chose to bat right-handed all the time, had beaten Willie Mays, 9-8, in the first Home Run Derby.

The winner each week was invited back. Killebrew beat Rocky Colavito, 6-5, in the first extra-inning derby, earning $6,000. The next week, Killebrew lost to Ken Boyer, who then lost to Hank Aaron.

Aaron ran off a string off six consecutive wins, first beating Lemon, 6-4, and finishing with a 3-2 win over Allison. Aaron earned more than $60,000 for these six shows. Wally Post, of all people,  finally beat Aaron.

Mark Scott, the producer and announcer, died in July 1960 of a heart attack, and the show died with him, although it lives on in repeats on ESPN.

Wikipedia has a chart of the winner and loser from every show and how much they earned. A box set of DVDs was released in 2008, and individuals shows are sometimes available for streaming.