The 2019 World Series victory was the triumphant culmination of the Nationals’ 15th season since Major League Baseball returned to the Nation’s Capital in 2005. In eight of those full seasons, all of them in a row since 2012, the Nats finished with a winning record, but it took the Washington version of the Expos/Nationals franchise until 2019 to finally climb above .500 with 1,222 wins and 1,206 losses.

Although the 2005 team ended dead even at 81-81, it also was dead last in the N.L. East for the first of five times in six seasons. The 2007 team finished fourth in the five-team division. 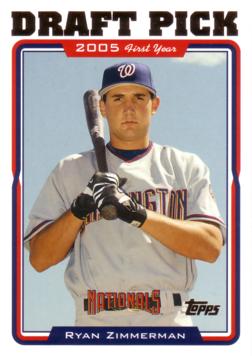 Individually, it’s no surprise that Ryan Zimmerman, who played in all 15 Nationals seasons until 2020, beginning with his September 2005 call-up, holds the bulk of the team’s batting records. Zim leads in games played, at-bats, runs scored, doubles, home runs, RBIs and walks. He also is the franchise leader, topping all Expos, in home runs, hits, doubles and RBIs. (add runs scored as of May 2021.)

In all those major hitting categories where productivity is helped by longevity, three players hold down nearly all the spots behind Zimmerman: Ian Desmond, Bryce Harper and Anthony Rendon. Desmond is second in games and at-bats; Harper is second in home runs and runs scored; Rendon is second in hits, doubles and RBIs. Behind those four is Jayson Werth. He ranks fourth in walks and runs scored and fifth in every other category.

Trea Turner is the Nationals’ leader in stolen bases with 159. Another full season should move him into fourth place in Expos/Nationals history, but it would be a while before he could catch franchise leader Tim Raines, who stole 635 bases for the Expos. (Turner’s four triples in the truncated 2020 season moved him past Cristian Guzman for the Nationals’ lead in that department. Trea now has 29 to Guzman’s 28.)

Guzman, an early free-agent signing for the Nationals, didn’t realize his eye sight was bad in 2005 when he hit an uncharacteristic .219. He missed all of 2006 after shoulder surgery, but fitted with contacts, he was hitting .328 when he tore a thumb ligament in June 2007. He came back to make the 2008 all-star team and hit .316 for the season.

When he wasn’t striking out at an alarming rate, Danny Espinosa got hit by 73 pitches, by far the most of any National. That’s second all-time for the franchise to Ron Hunt, the quintessential batsman known for getting hit.

Zim also is the leader in sacrifice flies with 67 and in total bases with 3,039.

Determining the Nationals career leader in batting average, on-base percentage, slugging and other categories, requires setting subjective benchmarks for plate appearances. Let’s look for the leaders among players who spent at least two full seasons with the team and had a memorable impact, such as Michael Morse, Daniel Murphy and Adam Dunn. Those three each had at least 1,300 plate appearances. Setting the bar at 2,500 times up, for example, would eliminate Turner, Guzman, Nick Johnson and Wilson Ramos. So I’ll list some leaders at different levels and mention a few shorter-term contributors.

Murphy, who signed with Washington when Brandon Phillips wouldn’t, was a hitting machine for his two and half seasons in D.C. In 342 games in 2016, ’17 and ’18, Murphy hit .329 with 54 homers and 226 RBIs. His .347 in ’16 nearly won the batting title and is the highest of any National who has qualified. Nobody who played for Montreal or Washington that long had a higher batting average with the team. Murphy’s .930 OPS (on-base plus slugging) is second only to Juan Soto’s .937 after Soto’s first 1,153 times to the plate over two seasons. I’m not judging Murphy’s personal beliefs or his lack of fielding aptitude, but the man could hit.

Among Nationals who played at least three seasons and got up at least 1,300 times, fan-favorite Michael Morse has the highest average: .294, on the strength of his breakout season in 2011. Morse had 1,353 plate appearances with Washington.

Does anybody remember poor Alex Escobar? Before serious foot and shoulder injuries  ended his short MLB career, he hit .356 in 33 games and 99 plate appearances for the Nats in 2006.

The oft-injured Nick Johnson knocked in the first run at Nationals Park and had a knack for getting on base. Baseball Reference includes his 2004 Montreal stats with his Washington numbers, which were better without them. In D.C., his OBP was .418. Only Soto (after his amazing 2020 season) is close at .415 so far. Harper left town at .388.

Another favorite sabermetric stat, BAPIP – batting average on balls in play, shows a three-way tie for the Nats’ career best: Morse, Murphy and Turner are all at .338 when they didn’t walk, strike out or homer.

Among pitchers, length of service helps put Stephen Strasburg atop the Nationals’ career list in victories (112), strikeouts (1,695) and innings pitched (1,428.2). Max Scherzer has the best earned run average at 2.74. Strasburg is next at 3.17.

Clippard held opposing batters to a .186 average when he was with the Nats. That’s a franchise best, too, for pitchers with a significant number of innings. Batters have managed a .199 average against Max.

In the might-have-been department, there’s Christian Garcia. A former top Yankees prospect fluently bilingual but with recurring arm problems, he was lights out in late 2012 and made the post-season roster. In 13 games, Garcia’s WHIP (walks and hits per inning pitched) was just 0.79 with 15 strikeouts in 12.2 innings. Sadly, that was it before his arm gave out.

A city that has lost two teams to franchise shifts has to be concerned about attendance. No one can predict when fans will be safe to gather at Nationals Park again, but what is known is that fewer people showed up during the championship run than did in the disappointing 2018 season. The Nationals fell from the eighth highest among the 15 National League teams to the 11th.

The Nationals have yet to attract more fans than the team did in its first year in D.C. As outdated an ashtray stadium as RFK was, it had more abundant parking. And, in my opinion, it was easier to get to by car than Nationals Park. Who knows when people will feel safe riding Metro again?

A fair settlement of the MASN deal is important to the ownership’s financial viability as is a return to some semblance of normal from the COVID-19 virus. Money talks. Pro sports, above all else, is a business.  Let’s hope another Bob Short isn’t waiting in the wings.