Harmon Killebrew signed with the Washington Senators in 1954 and appeared in his first major league game in June under the “Bonus Baby” rule that kept him on the Nats’ roster. It took him until 1959 to win a regular job as the Senators’ third baseman. He proceeded to tie for the American League lead in home runs with 42. He hit 31 more for the Senators in his injury-shortened ’60 season.

Fast forward to 1969: By then, Killebrew had added four more home run titles with the relocated original Senators in Minnesota. But the new Senators had a home run threat of their own: Frank Howard, the defending A.L. home run champ whose 44 round-trippers in ’68 had 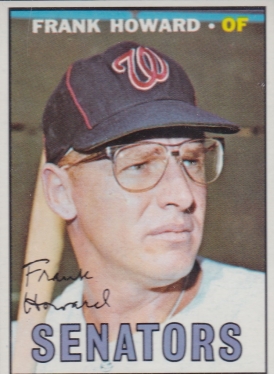 broken the Washington record of 42 held jointly by Killebrew and Roy Sievers, the A.L. champ in 1957.

In 1968, Howard, the Senators’ 6-foot-7, 255-pound slugger, took an early lead in the home run race that he never relinquished. During a six-game steak from May 12 to 18, he blasted 10 round-trippers in 25 plate appearances. That’s a record that 50 years later still stands. It was accomplished in a season so dominated by pitchers that the rules had to be changed to help hitters. The strike zone was reduced and the mound lowered for 1969.

The change had the desired effect, especially on a trio of A. L. sluggers: Howard, Killebrew and young Reggie Jackson of the A’s. With four homers in the first three games, Howard got off to a fast start. He finished April with 8 HRs. Jackson had 6 and Killebrew 4. Reggie caught up with Hondo with 9 HRs in May. Both ended the month with 15. Killebrew had 10.

Jackson had a hot June, belting 14 homers to take the league lead with 29 over Howard’s 24. Killebrew trailed with 18. Reggie belted three more homers in the A’s July 2 game.

By the All-Star break, which began July 22, Jackson was up to 37 home runs; Howard had 34 and Killebrew had 28. Hondo homered before hometown fans at the All-Star game, played at RFK stadium.

The last two months weren’t kind to Jackson. His batting average, as high as .294 in early August, fell to .275 by season’s end as hit .249 in August and September (and two games in October).  Worse still, he hit just two homers in September. Number 46 came on Sept. 6, and more than two weeks passed before he connected again. Killebrew, meanwhile, had a strong September and an important game in October.

Howard tied Reggie for the league lead by hitting no. 46 on Sept. 10. But both Jackson’s and Howard’s bats went quiet for the next two weeks. Killebrew forged a three-way tie by blasting two homers on Sept. 21. The Twins slugger took the lead for the first time when he hit his 47th the next day. Jackson’s final homer, on the 23rd, tied him for the lead a final time.  It was back to a three-way tie the following day, Sept. 24, as Howard hit no. 47.

The two sluggers remained tied as September ended. On Oct. 1, in the Senators’ final game, Manager Ted Williams batted Howard first in hopes of getting him an extra time at bat, to no avail. That same day in the first inning in Minnesota, Killebrew matched his career high when he hit no. 49. That gave him the last of his six home run titles, although had he and Howard tied, it would have been the second time he shared the crown.

Howard wasn’t to be denied in 1970, however, His 44 homers topped Killebrew’s 41. Hondo also led in RBIs in ’70 for his first and only time. As it was, Hondo hit more home runs than anybody in either league in the five seasons from 1967 through 1971.

So was 1969 the tightest race for a league home run crown? By one standard – the no. 2 finisher one homer and the no. 3 finisher two homers behind the leader and the total home runs hit by the three, the answer is yes. The 144 homers hit by Killebrew, Howard and Jackson topped the 138 hit by Albert Pujols (47), Prince Fielder (46) and Ryan Howard (45) in 2009, the closest another trio in the same year and league have come.

In 1948, 1960 and 2012, arguments could be made that those home run races  — in years when the leader hit at least 40 homers — were just as close or closer, but for different reasons. (The tight races when the leader had fewer than 40 quite likely were attributable to fewer homers hit overall.)

In 2012, the A.L. race could be called the closest ever. Miguel Cabrera’s 44 led the league. Right behind were Josh Hamilton and Curtis Granderson with 43 each. Next came Edwin Encarnacion with 42 and Adam Dunn with 41.

Yet 1969, by whatever standard and given the improvement of the team, has to be the most exciting home run race for fans of the expansion Nats.

A version of this appeared in the July 2019 issue of Squibber, the online newsletter of SABR’s Bob Davids chapter.