If anyone on the expansion Senators teams is remembered today by casual fans, surely that player is Frank Howard, the massive slugger brought to Washington in what undoubtedly was the best trade longtime GM George Selkirk ever made. Posting on a Facebook page about the expansion team in May 2020, Russ White, who covered the Nats for the Washington Daily News, wrote that manger Gil Hodges pushed for the trade. Hodges had played with the Dodgers and Howard.

The Senators had to give up the team’s best pitcher, Claude Osteen, who helped the Dodgers win the 1965 World Series and repeat as N.L. champs in ’66. But not only did the Nats get Howard, they also picked up Ken McMullen, who played a solid third base for the next five seasons, and starting pitchers Pete Richert and Phil Ortega. Richert became an all-star and matched Osteen’s 15 wins with Washington in ’64 with 15 of his own in ’65.

The real prize, however, was Howard, even though it took a couple of seasons for 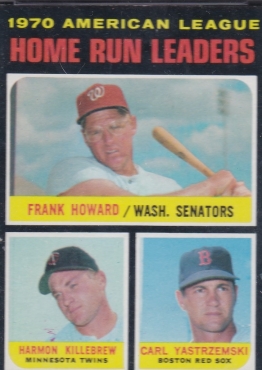 that to become apparent. It’s hard to believe that Hondo, as he became know, hit just 18 home runs in 1966. Manager Hodges urged Howard not to worry as much about his batting average and concentrate more on hitting for power. Obviously, the 6-foot-7, 275-pound, Hondo had plenty of that: He had hit 31 homers with the Dodgers in ’62 in fewer than 500 at-bats and followed that with 28 in 417 ABs.

Taking the advice, Howard doubled his HR output, hitting 36 in 1967, although his batting average dropped 22 points. The 1967 season began a five-year span in which Hondo led all major leaguers in home runs, belting 198, one more than Hank Aaron hit over the same period. Howard’s margin was even greater from 1968 through ’70: His 172 homers topped Harmon Killebrew’s 151 and Aaron’s 150.

Hondo’s 1968 season established him as one of the game’s premier sluggers. In a year dominated by pitching, Howard led the majors with 44 homers, many of them tape-measure shots. Along with his career-high 28 doubles, he also led the league in extra base hits, slugging average and total bases. With Carl Yastrzemski’s .301 average winning the batting crown, Howard’s .274 put him in the top 10. Howard’s 44 homers topped the Washington record of 42 set by Roy Sievers in 1957 and matched by Killebrew in ’59.

A six-game stretch from May 12 to 18, 1968, helped Hondo set slugging marks that have yet to be equaled. In 20 official at-bats, Howard hit 10 home runs. The first of the 10 — the only one hit at home — and the last two came off the Tigers’ Mickey Lolich. Two others came off “Sudden” Sam McDowell in Cleveland. One of Howard’s blasts landed on the roof of Tigers’ Stadium.

“Everything fell into place for me,” Howard told MLB.com’s Bill Ladson in 2017. ”As a hitter, sometimes you get into a groove, where you are reading the pitchers well. You are seeing the ball well.” To say the least!

Hondo’s home runs were frequent – he homered a league-leading once every 13.6 at-bats in ’68 – and frequently long, high and deep. At one point, a dozen upper-deck seats at what became Robert F. Kennedy Stadium were painted white to denote where Howard’s prodigious blasts landed. His longest at RFK, hit on Sept. 24, 1967, landed on a seat an estimated 535 feet from home plate.

Ted Williams in 1969 persuaded Howard to be more selective at the plate. The result was Hondo hitting a career-high 48 homers and drawing 102 walks, with a .402 on-base-percentage, and .296 batting average, his best as a Nat and eighth best in the A.L. The next year, he led the league with 132 bases on balls, 29 of which were intentional – also tops in the league. His OBP was a career-high .416. Howard led the league in home runs and runs-batted-in in 1970.

Not surprisingly, Howard was named to the A.L. All-Star team as a starting outfielder three times (1968-70) and as a reserve in 1971. He homered in the ’69 game, which was played before adoring fans at RFK.

Howard last played in the majors for the Tigers in 1973, where was reunited with his buddy and longtime Nats teammate Ed Brinkman. Hondo played briefly in Japan in 1974 before moving on to coaching and managing — the Padres and the Mets — and then scouting before retiring. He turned 83 on August 8, 2019.