The 1961 Washington Senators were assembled in a hurry after Calvin Griffith took his established team to the Twin Cities. Two days after the expansion draft in December 1960, the new Senators acquired a pitcher named Bennie Daniels along with two other players from Pittsburgh in exchange for the aging Bobby Shantz. Daniels developed into the Nats’ most durable starter, throwing 212 innings in what otherwise was a dismal first season. 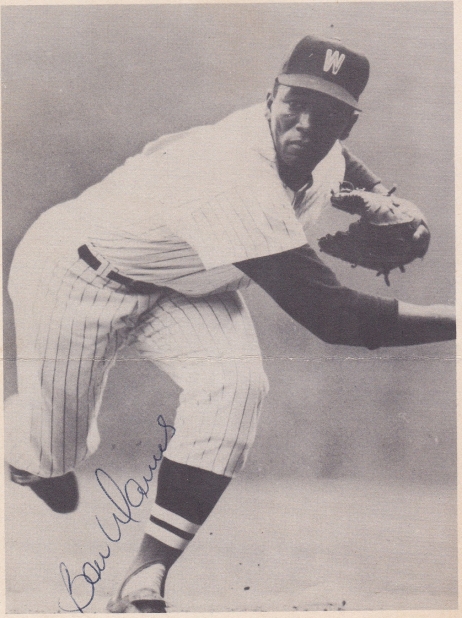 Aside from Daniels’ solid performance in 1961, Bennie has several distinctions that place him in the midst of baseball history. He made his major league debut on Sept. 24, 1957, with the Pirates in the last game played at Brooklyn’s Ebbets field before the Dodgers moved west. He acquitted himself well over seven innings, but lost 2-0. In 1960, he matched up with Sandy Koufax on a night the Hall of Fame lefty gave up just one hit – a single to Daniels – in a 1-0 victory. Bennie gave up four hits over seven innings.
Bennie was on the mound to start the last major league game played at old Griffith Stadium, on Sept. 21, 1961. He took the loss as the Twins – those former Washington Senators – won, 6-3. Next April was a different story, however. Daniels was the opening day starter in front of President John F. Kennedy and a capacity crowd for the first MLB game played at District of Columbia Stadium. Bennie beat the Tigers, 4-1, on a five-hitter. Daniels also drove in a run with a single.
In Daniels and veteran teammate Dick Donovan, the 1961 Nats had two very good starting pitchers, if little else. Despite missing a month with arm trouble, Donovan led the league in earned run average. Although Sabermetrics were developed later, in retrospect, Donovan’s 1.026 WHIP (walks and hits per inning pitched) was also the league’s best. But Daniels was not that far behind. He posted a 12-11 record on a team that lost 100 games. His 12 complete games tied him for fourth. His 3.44 ERA ranked 15th among starters. His 1.25 WHIP was 13th and his WAR (wins above replacement) as calculated by Baseball Reference.com – 3.6 – was 14th. (Donovan’s 4.2 WAR ranked fourth.)
Although Bennie wasn’t able to duplicate his 1961 success, he was on the mound for one more historic day in baseball. On Sept. 6, 1963, he pitched a complete game to defeat the Indians, 7-2. He also doubled and drove in a run. The game was deemed by a baseball Hall of Fame committee to be the 100,000 major league game ever played. It gained the distinction because a celebrity contest delayed the first pitch past that of games in New York and Philadelphia that had similar start times. Coincidentally, Tommy John made his major league debut in the game. (The 100,000th-game determination included the 1,000+ games played in the 1870s by the National Association, which today is no longer recognized as the first major league, so by today’s standards, the Sept. 6, 1963, game would not have been the 100,000th, but that’s revisionist history.)
Beset with recurring arm trouble, Bennie Daniels was used as a starter and in relief over the next four seasons. He showed occasional flashes of brilliance, throwing four shutouts, but before the 1966 season, he was sent to the Senators AAA affiliate in Honolulu. He retired after that season.
Daniels, always a good hitter, holds the record among expansion Senators’ pitchers for hits (38), home runs (4) and runs batted in (19). He also could field his position. His range factor in ’62 and ’63 ranked 2nd in the American League, according to Baseball Reference
As of October 2017, Daniels, 84, was living in Compton, Calif., where he attended high school.

A version of this appeared in the February 2017 edition of Nats News, the newsletter of the Washington Baseball Historical Society. Daniels signed the photo for me before game in the early ’60s.