The Covid-19 pandemic caused the 2020 season to be reduced to 60 games, the first time since the labor contract turmoil of 1994 and 1995 that fewer than 162 games have been played. Prior to that, the 1981 season was cut short by a player strike, and teams lost games to a labor dispute in 1972.

Going back another generation, dozens of players missed as many four seasons helping America fight in World War II and in Korea. Those missing games obviously had a major impact on the career totals of all of the players who missed times for reasons other than injuries.

As for the Nationals, Ryan Zimmerman skipped the 2020 season for reasons related to the pandemic. He’s played again in 2021 at age 37 before retiring with 284 home runs. If he had played and the season he sat out had been more than 60 games, he likely would have reached 300 homers.

Max Scherzer turns 37 in July 2021. As fierce a competitor as has ever walked onto – or stalked around — a pitcher’s mound, Max takes excellent care of himself. Still, can he continue to perform at the astoundingly high lev 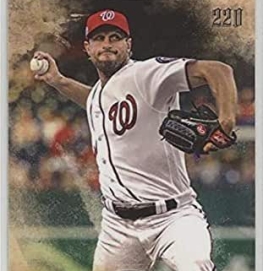 el he has since his breakout season in 2013? The pandemic prevented him in 2020 from matching  Tom Seaver’s record of nine consecutive  200-strikeout seasons.

Aside from the aging Nats, players such as Albert Pujols, Miguel Cabrera and Justin Verlander may not reach career milestones they might otherwise have because of  the truncated season.

The work stoppages of 1981 and 1994-95 could be a factor in keeping at least two players out of the Hall of Fame: Lou Whitaker and Kenny Lofton. Whitaker’s career wins-above-replacement is 75.1; Lofton is 68.4. Recent inductee Harold Baines, who missed  the same amount of playing time as Whitaker, had a career WAR of just 38.7.

Whitaker’s Tigers missed 124 games due to work stoppages during his career. He finished with 2,369 hits and 244 homers. It’s hard to argue that he would not have reached 2,500 hits and 250 HRs with those extra games. As it is, he was rookie of the year, a five-time all star and three-time Gold Glove winner at second. When he retired, the only other second basemen to match those figures were Hall-of-Famers Rogers Hornsby and Joe Morgan.

The 50+ games Lofton lost came mostly in August and September of 1994, the season in which he achieved a career-best 7.2 WAR. His 2,428 hit-total likely would have reached 2,500. He was at the peak of his career. Lofton’s Hall-of-Fame resume also includes an impressive 622 stolen bases and four Gold Gloves in center field.

Those are just two examples of player whose credentials for Cooperstown are still being weighed, but not on the writer’s ballot. Neither received the five percent needed to stay on it past their first year.

Countless players have had their careers derailed by injuries, of course, but far fewer have lost significant amounts of playing time because of events beyond their control – wars, strikes and now, COVID-19. Somehow, When healthy players are unable to play, the sting is greater.

We’ll never know, for instance, if Tony Gwynn would have hit .400 in the strike-shortened 1994 season. Would the Expos have won the N.L. East and gone to the World Series that year (and perhaps never have become the Nationals)?

Most famously, Ted Williams, one the game’s greatest players, lost nearly five full seasons in the prime of his career to military service – first in World War II and then in Korea. After his first triple-crown season in 1942, he missed all of the next three years – at age 24, 25 and 26. Reactivated at age 33, he missed nearly all of 1952 and two-third ’53, yet came back to hit .407 in 37 games. He hit .345 in 1954.  Even conservatively assigning him mediocre statistics for those years, he clearly would have reached 700 home runs, 2,200 RBIs and 3,500 hits. His lifetime average probably would have been higher than the lofty  .344 he ended up with.

Several other Hall of Famers also lost prime years to World War II. Next to that of Williams, Bob Feller’s career was probably the most affected. Coming off three seasons of 24, 27 and 25 wins and four strikeout titles – Feller, who volunteered for the Navy, lost nearly four years (at ages 23 to 26) to military service.

Joe DiMaggio, Williams’ peer, also missed three prime years – ages 28, 29 and 30 – in the service. The Yankee Clipper likely would have neared 3,000 hits and 450 homers if he had played over that span. Yet he wasn’t all the Yankees lost in WWII.

The Bombers’ Hall-of-Fame double-play combination,  Phil Rizzuto (three seasons) and Joe Gordon (two) missed prime years to the war. All-star outfield Tommy Henrich missed all of 1943, ’44 and ’45. Fellow all-star Charlie Keller missed 1944 and most of ’45. Two other Yankee Hall of Famers, 37-year-old catcher Bill Dickey and 38-year-old pitcher Red Ruffing also spent two seasons in the service near the end of their careers.

The Boston Braves lost two pitching aces for three full seasons at the start of their careers – Warren Spahn,  who went on to become the winning-est lefty of all time, and Johnny Sain, who returned from the war to win 20 games in 1946.  They led the Braves to the N.L. pennant in 1948.

The Senators lost four of their best players to military service, one of whom might have gone on to a Hall of Fame career, were it not for a war injury. Cecil Travis, their shortstop and third baseman, was a three-time all-star who led the A.L. in hits in 1941, finishing at .359. He had hit .317 or better in six of his seven seasons when he was drafted. He missed three years and suffered frostbite to his toes at the Battle of the Bulge. He was not the same player when he returned.

Senators all-stars Mickey Vernon, Buddy Lewis and Sid Hudson missed three seasons each in the war. Perhaps the 1945 Senators might have overtaken the Tigers for the A.L. pennant if future Hall of Famer Early Wynn had not missed that season in the military. Pitcher Walt Masterson, who later started an all-star game, missed nearly three seasons in the service.

Johnny Pesky, a star shortstop for the Red Sox in the ’40s, led the league in hit and batted .331 as a rookie before missing the next three seasons in the military. Despite a .307 lifetime average, he’s not in the Hall but does a have a foul pole named after him in Fenway Park. Pesky actually finished his career with the Nats in 1954.

Another Red Sox star of the ‘40s, Dom DiMaggio, spent three years in the service from age 26 to 28. An outstanding center fielder, he finished with a .298 average. Mostly hitting lead-off, he had .383 lifetime OBP. Hard throwing Virgil Trucks missed two prime years –at age 27 and 28 – to the war after establishing himself as a top pitcher with the Tigers. Johnny Vander Meer, of double-no-hitter fame, missed two full seasons after leading the N.L. in strikeouts three years in a row. Elmer Valo, a steady outfielder for the Athletics and later an amazing pinch hitter for the 1960 Senators, spent 1944 and ’45 in the service.

More than 500 players who spent time on major league rosters served during World War II, some missing as many as four seasons. Surely, they are rightly proud of having served — many, like Travis and Lewis, earned medals — and, all realized, nothing was more important than winning the war.

The Korean War cost Williams, Willie Mays and Whitey Ford nearly two years of their playing careers. Other notable players who lost most of two seasons to that war include Cy Young Award winners Don Newcombe, Bob Turley and Vern Law. Jim Lemon and Ron Kline, both of whom starred later for the original and expansion Senators, respectively, also served during the Korean War.

Players in the Vietnam era mostly served a few months, if at all, when reserves or National Guard units were activated. Darold Knowles and Ed Brinkman were lost to the expansion Nats at times under those circumstances.

Unless a draft is re-instituted, military conflicts are unlikely to affect pro baseball players. At least, let’s hope our nation does not have to face anything of that sort. A dispute over the next collective bargaining agreement came close to shutting down the game in the spring of 2022 and issues surrounding Covid-19 continue to keep some players off the field.