The Homestead Grays, a renowned team before baseball’s desegregation, traced its roots to black workers in a steel-mill town across the river from Pittsburgh in 1912. The Grays called Washington home for at least half of their league games, beginning in 1940. The Negro National League team, lead by Buck Leonard and Josh Gibson, was clearly baseball’s best in D.C.  during World War II.

Author Brad Snyder’s 2003 book, Beyond the Shadow of the Senators, is the definitive history of the Grays’ association with D.C., and is a main source of much of what is here. If you are interested in the history of professional baseball in Washington and the effort to allow black players in the majors, I urge you to get a copy of this book. 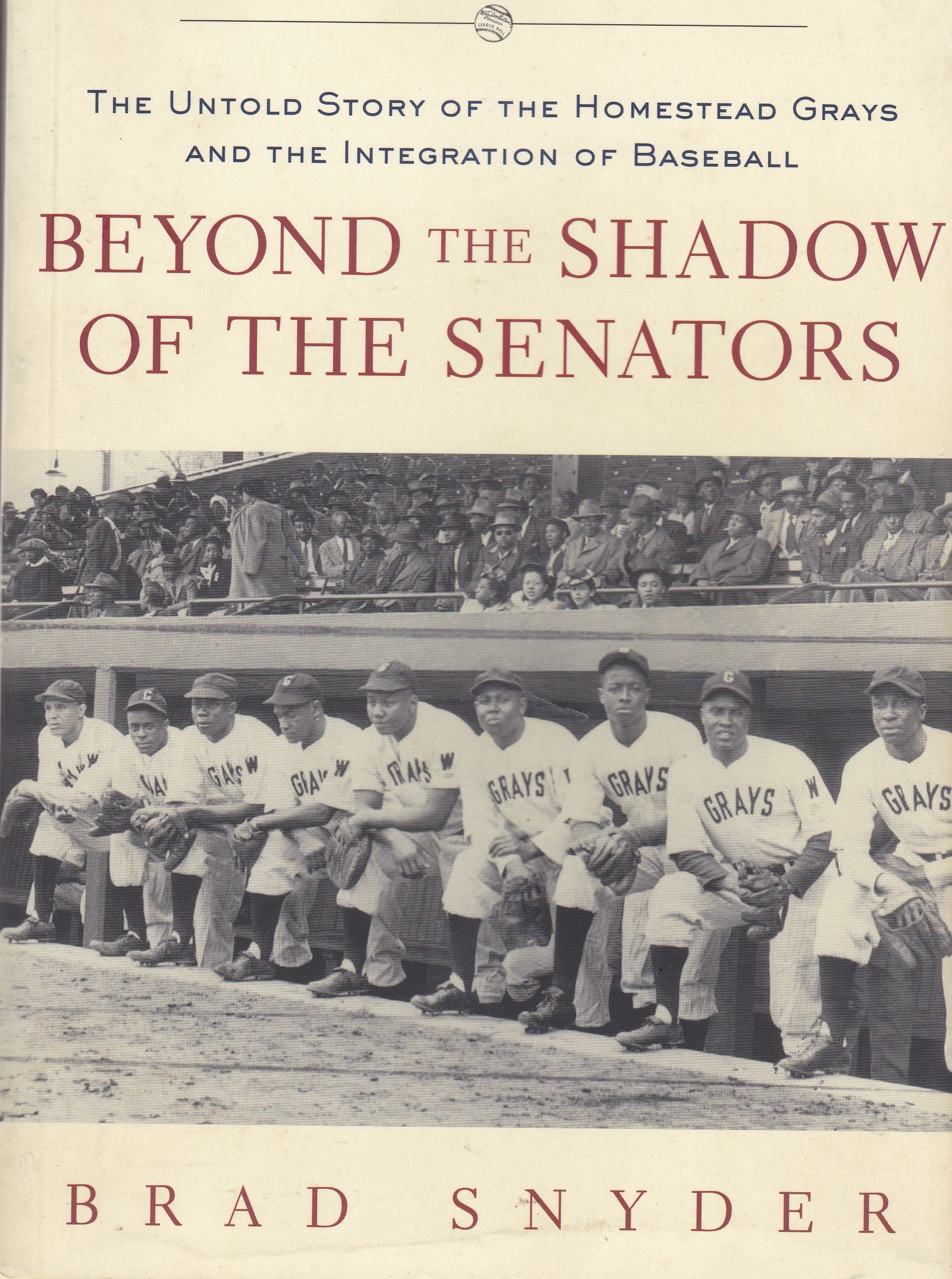 ial advantage of Washington’s growing black population by welcoming Negro League games in D.C., he relegated his Senators to mediocrity by refusing to sign some of the finest Negro League stars playing in his own stadium, and was a major obstacle to breaking down the color barrier.

All-black professional teams, including several that were briefly based in Washington, often rented Griffith Stadium in the 1920s when the Senators were on the road. These games rarely drew large crowds, yet Griffith’s American League team had a devoted black fan base.

When he became principal owner of the Washington team in 1920, Griffith established a right-field pavilion for black fans, although just one other big league park remained segregated even on a de facto basis. He allowed football games between the city’s black high schools to be played at his stadium and rented it for events such as pro boxing and religious services by a well-known black preacher. The annual Thanksgiving college football game between two leading black universities, nearby Howard and Pennsylvania’s Lincoln, drew capacity crowds to the ballpark.

By the ’20s, the neighborhood around what became known as Griffith Stadium was becoming increasingly populated by middle- and upper-class black families. Griffith allowed black and white teams to play each other until an early ’20s game ended with some violence on and off the field. Griffith didn’t allow another interracial exhibition game until 1942.

Beginning in 1937, the Grays had the best record in next nine Negro National League seasons through 1945. Unsurprisingly, a matchup with the Negro American League didn’t take place every post-season, given the lingering Depression, World War II and the erratic schedules of the Grays and other Negro League teams. Exhibition games, many against white semi-pro teams, often outnumbered official league games and made more money for the Grays.

With attendance in Pittsburgh declining, the Grays ownership saw the advantage of playing more often before Washington’s growing black population. Clark Griffith was more than happy to rent his stadium to the Grays when the Senators were on the road. Griffith received all the concession revenue and staffed the games with his all-white employees. The revenue Griffith received from the Grays and football’s Redskins was often the different between the Senators making a profit or losing money during a year. There’s little doubt financial considerations fueled Griffith’s refusal to sign black players.

The fortunes of the Grays in D.C. took a turn for the better, thanks to a May 31, 1942, exhibition game against a white “all-star” team led by Dizzy Dean and members of the Grays plus Paige, on loan from the Monarchs. The game drew a capacity crowd and coverage – some of it condescending and racist – from all the daily newspapers. Paige and the Grays won easily. The only real current star on Dean’s team was the Senators shortstop Cecil Travis, who was on leave from the Army. Paige mowed down the Dean All-Stars over five innings, yielding a single to Travis before striking him out. Dean, who already had retired, gave up two runs and three hits in less than an inning.

On June 18, 1942, Paige returned with the Monarchs to play against the Grays in D.C. for the first time. A standing-room-only crowd of more than 28,000 saw the night game, which also was the first time Griffith had allowed the Grays to play under the still-new stadium lights. Paige shut out the Grays over his five innings, but the Grays came back to win, 2-1, in the bottom of the 10th.

The attendance figures got another boost when Paige and the Monarchs returned for an Aug. 13 game. A crowd of more than 20,000 saw the Grays again defeat the Monarchs, this time 3-2 in 12 innings. Paige went the distance and took the loss.

After the Grays and Monarchs finished their seasons as champions of the two Negro Leagues, they met for the first game of their post-season series on Sept. 8, 1942, at Griffith Stadium, before 25,000 fans. This time, Paige shut out the Grays for six innings. Kansas City won, 8-0. The Monarchs went on to sweep the series.

Wartime gasoline rationing forced Negro League teams to travel by rail rather use their team buses in 1943. This resulted in the Grays playing 40 games on 26 dates at Griffith Stadium that season (several were Sunday double-headers). Washington’s streetcar line conveniently  dropped off fans — unable to drive — at the stadium entrance. The ’43 Grays drew more than 225,000 fans, helped by four games against Paige and the Monarchs, which attracted crowds of more than 20,000.

Josh Gibson hit more home runs at Griffith Stadium to left and center field– 10 or 11, depending on the source – in his 160 at bats at the cavernous stadium in 1943 than the entire American League did (9) all year. The Grays won 32 of their games at Griffith Stadium that season, including two against the Birmingham Black Barons in the Negro League World Series. The 1943 Grays defeated the Black Barons to win the series four games to three, with one ending in a tie.

The 1943 season proved to be the high point of the Grays stay in Washington. Snyder blamed the decline mainly on an easing of gasoline rationing that allowed pleasure driving and the Grays being able to use their team bus again, which made playing games in Pittsburgh easier. The average attendance for the Grays’ 15 dates in D.C. fell to less than 8,000. Only the opening home game against the New York Black Yankees and a double-header against the Monarchs drew more than 15,000. Still, the Grays were a success on the field and had an easier time in the ’44 Negro World Series, beating Birmingham four out of five.

The Grays made it to the post-season series again in 1945, but were swept in four games by the Cleveland Buckeyes. The series’ third game, played at Griffith Stadium, was the Grays’ last post-season game in Washington.

Many of these championship seasons featured future Hall-of-Famers Ray Brown and “Cool Papa” Bell, in addition to Gibson and Leonard, but by 1945, all four were getting up in years.

The team’s season opener in D.C. drew a crowd of 13,000, but the Grays’ average attendance at Griffith Stadium that season fell to about to about 5,000, even though Washington’s black population was growing by more than 50 percent during the 1940s.

As usual, games against the Monarchs drew the biggest crowds, but this season the draw was Kansas City’s newest player: Jackie Robinson. The Monarchs played in D.C. in a late June double-header and again in an August twin bill. Robinson, in his only Negro League season, tied a Negro League record for Griffith Stadium games with seven straight hits and impressed everyone with his daring base-running.

The 1946 season turned out to be the last profitable one for the Grays. It was also Gibson’s final season. He died in January 1947 at age 36 after years of substance abuse and mental health problems.

The Grays continued to play league games at Griffith Stadium even after the Negro National League folded following the 1948 season, with the Grays winning a final title. Average attendance at Grays’ game had fallen to about 2,000.

Although none of the games was played in Washington, the Grays beat the Birmingham Black Barons, four games to one, in the last Negro League World Series. The Barons team featured a 17-year-old outfielder named Willie Mays. With Jackie Robinson finally having broken down the major leagues’ color barrier the previous year, this series was the swan song for the Negro National League.

The Grays didn’t join the Midwest-based Negro American League in 1949, instead aligning with the lesser Negro American Association, essentially a black minor league on the East Coast. With both the Grays and the Negro American League struggling to survive, the latter agreed to play a few games against the Grays at Griffith Stadium late in the season. Because of rain-outs, just one double-header actually was played in D.C. — before a paltry crowd of 1,200.

The Negro American League allowed the Grays to become associate members for 1950, and a handful of league games were played before small crowds at Griffith Stadium. The last was a September double-header against the Philadelphia Stars. Paige, who had returned to the Negro League with the Stars, started the first game. The Grays hit Paige hard and won both games.

Although a few of the Negro League teams, including the Black Barons, continued to play irregular barn-storming schedules throughout the 1950s, the Grays folded after playing a barn-storming tour of their own in the fall of 1950.