Ellis Clary played for the Washington Senators and St. Louis Browns for nearly four seasons during World War II. He had an at-bat during the Browns’ only World Series appearance in 1944. Once his playing career ended, he spent six years as a coach with the Senators in the 1950s and more than three decades as a scout for the Twins, White Sox and Blue Jays. 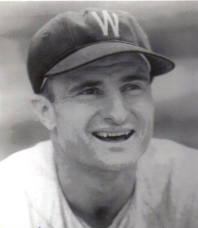 Although he stood just 5-foot-8 and weighed about 160 pounds, Clary was noted as a quick-tempered brawler as a player, but later developed a reputation as a wise-cracker and humorous story-teller. “I believe Ellis could make a dog laugh,” pitcher Spud Chandler, later a fellow scout, said of Clary.

“Clary has a sharp wit,” columnist Bob Addie wrote in 1957, “and his keen satire is more deadly than his fists — which is saying a great deal since he was quite a battler.”

Clark Griffith traded Clary to the Browns in August 1943. “For once, the Old Fox was wrong, ” Clary said years later about being sent to a team that would win the pennant in ’44, “and I thank him for it.”

With most of the game’s stars in the service, the Browns’ 1944 club featured 18 players deemed 4-F. Clary, who had back trouble, was one of them. The Browns held on to win the A.L. pennant when the Senators beat Detroit on the last day of the season.

Clary had finally been promoted to the majors in 1942 after five years as Senators’ property in the minors, where his fists and temper often got him in trouble. When Calvin Griffith was managing the Charlotte farm club in 1938, Clary started a fight with a Durham player that quickly involved others on both teams. Griffith punched a man who had his hands around Clary’s neck. The next thing you know, Griffith was under arrest. The man he punched turned out to be the local police chief. That was the first of two times Griffith was charged after Clary punched somebody.

Clary and pitcher Early Wynn were roommates in the minors. With Sanford in the Florida State League in 1937, Clary gave Wynn the nickname “Gus” for no reason other than he liked the way it sounded. The nickname stuck with Wynn throughout his Hall of Fame career.

In 1938, after starting the year with Springfield in the Eastern League, Clary climbed into the stands and threw water on a fan who was heckling him after an error. The team owner released him the next day, and Clary ended up back in Charlotte.

“That wildcat would be a good ballplayer if he would settle down,” Clark Griffith said of Clary, “but he gets in trouble wherever he plays.”

Once in Washington, his scrappy play quickly won over Senators’ fans, even though he wasn’t much of a fielder. The Sporting News named him the second baseman on the 1942 rookie all-star team at season’s end, but he was really the only candidate that year. Called up in May, he hit .275 in 291 plate appearance over 76 games.

“His teeth were as much a part of his fielding equipment as his glove,” Shirley Povich wrote in 1954 about Clary’s performance in the field.

Clary was fast afoot. He often made a few bucks on bets by racing opposing team’s players. He met his match, however, when he took on Jesse Owens in a 100-yard sprint exhibition. “He went by me so fast, I don’t think I could have beaten him on a Harley-Davidson,” he told columnist Bob Broeg in 1977.

Sent to the minors by the Browns before the 1946 season, he performed well through 1952, when at age 37, he was voted the most valuable player in the Southern Association. Clary was a key player on pennant-winning teams in Atlanta in 1950 — where he was a teammate of Eddie Mathews — and Charlotte in 1952.

The ’53 season was his last as an active player. All together, he played parts of eight season with the Nats’ farm teams in Chattanooga and Charlotte. He began 1954 as a coach with Chattanooga before taking over as manager at Charlotte in late June. The next season, Charlie Dressen, the new Senators’ manager, hired him as a coach. He stayed on in Washington after Cookie Lavagetto replaced Dressen. Clary remained in uniform through the 1960 season, the Griffith franchise’s last in D.C.

After Calvin Griffith moved the team to Minnesota, Clary managed the Charlotte team again in 1961 before becoming a Twins’ scout in 1962. He stayed in that role  until 1985, recovering from a serious heart attack in 1970. He was hired to scout for the White Sox in 1985 before Pat Gillick lured him to the Blue Jays in 1987, where Clary remained until he retired in 1993.

Clary died in his native Valdosta, Georgia, in 2000.

A longer version of this appears on the SABR.org web site’s BioProject.

I'm a retired daily newspaper journalist and life-long baseball fan. I write biographers of players when I can for the Bio Project and game stories for the Games Project. Please feel free to offer suggestions for blog post by emailing me at senators24@yahoo.com. View all posts by Andrew Sharp