On September 28, 1952, at Fenway Park, journeyman reliever Tom Ferrick pitched four scoreless innings and was the winner in a 5-4 Senators’ victory. The season-ending win let Washington finish at 78-76, the last time the original Senators had a winning year. It also would be Ferrick’s last time on a major league mound.

He began his major-league career with the Athletics in 1941 and the Indians in 1942 before enlisting in the Navy. He missed the next three seasons while in the service. When he returned, the Indians dealt him to t 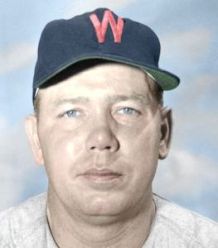 he Browns, who in turn traded him to Washington. The Senators traded him back to the Browns for the 1949 season.

After four seasons with the American League’s bottom-feeders, Ferrick found himself with the first-place Yankees just before the trading deadline in 1950. He won eight games and saved nine others for New York down the stretch and was the winning pitcher in Game 3 of the 1950 World Series, pitching a scoreless 9th inning against the Whiz-Kid Phillies.

Exactly a year after his trade to the Yankees, Ferrick was part of a trade that sent lefty Bob Kuzava to New York in a deal that turned out to be a good one for Washington. In addition to Ferrick and pitcher Fred Sanford, the Nats also got Bob Porterfield, a right-hander who in 1953 would be the last Senator to win 20 games, going 22-10. (My copy of Shirley Povich’s 1954 team history is autographed by Porterfield)

Despite his release after ’52, Ferrick had a soft spot for Nats’ owner Clark Griffith. W 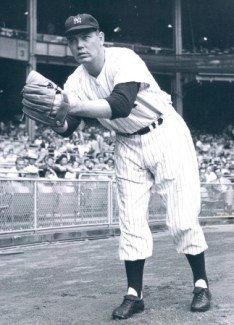 hen Griffith let him go, “He told me how sorry he was. He had to make room for some young pitchers. He was right.… He thanked me for all I had done for the club,” Ferrick told veteran sportswriter Jerome Holtzman in 1987. “He didn’t have to do that. Most of the time they give you the pink slip; they don’t say goodbye.”

Assessing his own career in 1957, Ferrick was self-deprecating. “I never had too much stuff. A medium rare fast ball and a fairish curve. That’s all.  I toyed with the knuckler but rarely threw it. But I could get the ball over the plate and that’s the main thing with a relief pitcher,” he told an Associated Press writer. “I wasn’t much. I’d keep the curveball low and outside and hope the batter would bite.”

Ferrick wasn’t out of work long. He took a job as a player-coach with Indianapolis, Cleveland’s top farm club. He appeared in 23 games in 1953, his last as a player. The team was managed by Birdie Tebbetts, who  took Ferrick along with him to Cincinnati when Tebbetts was hired as manager.

That began a nearly 12-year run as a pitching coach for Ferrick with the Reds, the Phillies, the Tigers and the Athletics before he move on to scouting for the A’s and the Royals. He joined the Royals staff for its first season and remained the team’s top special assignment scout until 1989. He stayed on as a consultant until 1994, when he ended nearly 60 years in professional baseball.

In the mid-1930s, Ferrick, still a teen at a seminary high school, got a chance to pitch to Babe Ruth in a batting practice at Yankee Stadium. In what would have been 1933 or 1934, Ferrick already was playing for a semi-pro team. Ruth had fallen ill and was recovering while the Yankees were away. Several school-age pitchers, including Ferrick, were recruited to throw batting practice to The Babe and to shag fly balls. In a 1992 interview, Ferrick called it one of his two biggest baseball thrills, the other being his World Series win.

In his final season, Ferrick faced Mickey Mantle in four games, which makes him one of just two players (the other being Al Benton, who faced both when it counted) known to have pitched to Ruth and Mantle.

Ferrick died in October 1996 in suburban Philadelphia, where he had made his home since the 1940s. He was 81. His oldest son, Tom Ferrick Jr., shared a Pulitzer prize while working at the Philadelphia Inquirer, where he was a reporter, editor and columnist.

A version of this appeared in the December 2018 Squibber, the quarterly newsletter of the Bob Davids chapter of SABR. My full bio of Ferrick appears on SABR.org’s BioProject.