George Selkirk became the expansion Senators second general manager on Nov. 21, 1962. He succeeded Ed Doherty, who had been fired at the end of the 1962 season by then Senators majority owner Elwood R. “Pete” Quesada.

As a player, Selkirk, nicknamed “Twinkletoes” because of his running style, had replaced Babe Ruth 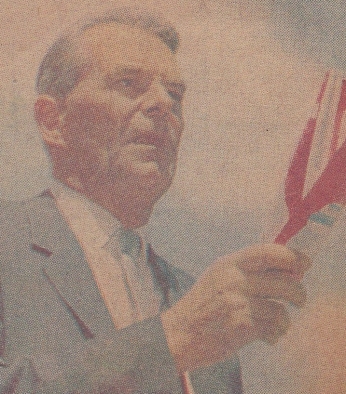 as the Yankees right fielder in 1935. He acquitted himself well, finishing his career with six World Series appearances and a .290 lifetime average. He hit better than .300 five times, drove more than 100 runs twice and was two-time all-star.

On May 28, 1941, Selkirk earned a place in the history of Griffith Stadium with a game-winning, pinch-hit, grand slam in the eighth inning of the first night game played in the Senators home park.

After his playing career he served as a manager, scout and front-office executive for the Yankees, Athletics and Orioles before coming to Washington. In 1951, he managed Mickey Mantle when the young slugger was demoted to Kansas City for a time.

Selkirk, a Canadian by birth, is most remembered for two key events in the history of the expansion team: the hiring of Gil Hodges as field manager in May 1963 and the blockbuster trade he made with the Dodgers in December 1964. Selkirk sent Nats ace Claude Osteen to Los Angeles along with young infielder John Kennedy in exc

In May 2020, Nats beat writer Russ White of the old Washington Daily News posted on a Facebook page about the expansion Senators that “Gil Hodges had more than a little to do” with the trade. That would make sense, because Gil had been with the Dodgers when Hondo came up and doubtless would have recognized how much better Frank could be. He well may have liked what saw of the two pitchers, too.

Although none of Selkirk’s other transactions paid off as well, this one unquestionably was a tremendous success. Richert in ’65 matched Osteen’s 15 wins in ’64 and became an all-star. Ortega won 12 for a team that lost 92 games and remained a solid starter for three seasons. McMullen became the regular third baseman, a position he held into the 1970 season. And then there was a guy named Frank Howard. This giant of a man hit more home runs from 1968 through 1970 than anyone else in the majors. If any player from the expansion Senators is remembered today, it is Hondo,  the record-setting slugger dubbed “the Capital Punisher” by sportswriter Bob Addie.

The trade wasn’t entirely one-sided. The Dodgers got what they wanted in Osteen, who teamed with Sandy Koufax and Don Drysdale to carry Los Angeles to a World Series triumph in 1965 over the Twins — a team full of former Senators and Senators’ farmhands. A three-time all-star, Osteen was a 20-game winner twice over nine seasons with the Dodgers. Kennedy didn’t pan out. The Dodgers had hoped

he would become their third baseman, but L.A. would have been better to have kept  McMullen.

Selkirk’s next best acquisition arguably was the drafting of Dick Bosman from the San Francisco Giants. Bosman reached the majors with the Nats in 1968 and developed into the staff’s ace. He led the American League in earned run average in 1969. Selkirk also was at the helm when Washington drafted Joe Coleman, who became a star after owner Bob Short sent him to Detroit in the infamous Denny McLain deal.

Another trade by Selkirk that worked out well was swapping fading outfielder Don Lock to Philadelphia for relief ace Darold Knowles in late November 1966. The Phillies actually threw in some cash in the deal. Knowles, despite missing most of 1968 while in the military, saved 60 games for the Senators from ’67 into ’71. He went to greater glory after he was traded to the Athletics, setting a record that can’t be broken: pitching in all seven World Series games in 1973.

In one of his first moves as GM, Selkirk selected a young Lou Piniella from Cleveland in the then experimental first-year player draft in the fall of 1962, but later dealt Sweet Lou to Baltimore for pitcher Buster Narum. Piniella would not establish himself in the majors until 1969, by which time he had been traded three more times, so the blame on missing his future stardom does not rest entirely on Selkirk.

In November 1967, Selkirk picked up a young Toby Harrah from the Phillies’ system in the minor league draft. Harrah started at short in the Senators’ last opening day game, but didn’t become a star until after the team was in Texas.

When he acquired the team after the 1968 season, Short dismissed Selkirk and field manager Jim Lemon. The new owner took over as his own GM. His hiring of Ted Williams as manager resulted in the Senators’ best showing in 1969 — with a team assembled by Selkirk — but Short’s trades were a disaster.

Nothing seems to have been written about how Selkirk decided upon Gil Hodges, who was still an active player when he was hired to manage the Senators. The two had no previous ties, nor did Hodges have any connection to Washington. Yet the Senators improved every full season under the former Dodgers’ star before he left for the Mets and guided them to a World Series title in 1969.

Selkirk admitted he was a traditionalist, “an old-fashioned baseball man,” he told Merrell Whittlesey of the Evening Star in December 1962. He  favored first-hand observations through scouting as opposed to even the rudimentary statistical analysis of his time as GM. “I don’t care how many pitches a pitcher throws, and I don’t even want to know,” he said.

Clearly, he didn’t like change in the game. “Interleague play.” he told the Sporting News, “would be the fastest possible way to ruin all of baseball.” When a proposal was made to create a “team error” in scoring, Selkirk responded: “Baseball didn’t become America’s No. 1 sport by changing the rules. It became No. 1 by not changing the rules.” He couldn’t be accused of being ahead of his times.

Selkirk retired from baseball after he left the Senators. He and his wife settled in Fort Lauderdale, Fla., where he died in January 1987.

One thought on “George Selkirk molded the expansion Nats”