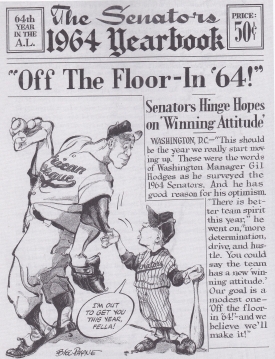 of which was a tie with the A’s). The Athletics finished 10th three times and 9th twice (tied with Washington in ’61).

As the fortunes of those two A.L. teams rose ever so slightly, the Yankees and Red Sox stumbled badly. In 1965, New York’s record run of 39 straight winning seasons ended as the team finished in 6th place. But the Sox finished 9th in ’65 with 100 losses. The Yankees, meanwhile, became a trivia answer (barely) in 1966 by becoming one of just six teams ever to finish 10th.  Eighth-place Washington had three games canceled and not made up, finishing at 71-88. The Red Sox were half a game back at 72-90. The Yankees also had three games canceled, and finished dead last at 70-89, just a game out of 8th place – but out nonetheless – and forever. (It’s a good thing the no.1 draft choice wasn’t at stake.)

Aside from the ignominy of finishing 10th, the Yankees did it the same year the Mets climbed out the cellar, creating another tricky trivia question: When did the Mets finally finish ahead of the Yanks in the standings?

The Red Sox rebounded dramatically, winning the pennant in 1967, but the Yanks finished no better than 9th that year.

In the N.L., the Mets made a similar jump, but only after more seasons of utter futility. The Amazins lost 109 or more games for five straight years before climbing to 9th (and losing  95 games)  in 1966. The Mets fell back to 10th and 101 losses in ’67 before climbing a game ahead of the 10th-place Astros in ’68. Everybody knows what happened in ’69. The Mets rags-to-riches story would have been even better if they had lost another game or two in ’68.

Here’s a list of the only 20th century teams to finish 9th or 10th: